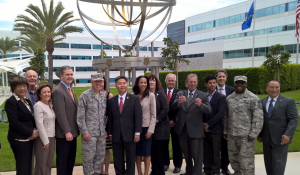 Located in El Segundo, the Los Angeles Air Force Base is the home of the Space and Missile Systems Center (SMC).  The SMC is the Air Force’s center for the development and acquisition of space and missile systems.  Established in 1954, the SMC has been a leader in managing space systems since the beginning of the space program.

The SMC is an important part of Southern California’s aerospace and defense industry.  Although the existence of this facility is largely unknown to most people living in the region, the base employs approximately 4,500 workers including military personnel, civil service employees, the Aerospace Corporation (a dedicated federally funded research and development center) and technical support contractors.  The SMC pursues partnerships with the broader space community to ensure an adequate technology base for space and missile programs.  The SMC works with industry to develop standards and best practices by sharing information and benchmarking with individual companies.

The region’s aerospace firms will need to work with educational institutions and policy makers to ensure an adequate supply of skilled workers.  The imminent retirement of thousands of baby-boomers from the industry in the coming years is a serious concern.  Training scientists, engineers and technicians should be a priority.  The aerospace industry is facing stiff competition with other technology based industries and Internet companies for skilled engineers.  Attention is usually focused on Silicon Valley as a technology center, but that ignores the larger center of high-tech activities that is Southern California’s aerospace industry.  It is also imperative that more Federal research and development dollars that are currently flowing into defense programs be directed to development of new technologies in the civilian sector.

The aerospace industry in Southern California is smaller (relative to the economy as a whole) than it was during the days of the Cold War, but it is no less innovative.  The regional economy has become more diverse, but the aerospace industry continues to be an important economic driver employing highly skilled workers, providing high-paying jobs and driving innovation.

The usual answer to the question of why Los Angeles became the nation’s aerospace capital is the local climate.  In the beginning, before the development of electronic instrumentation, that was true.  However, in the decades that followed, other factors came into play.  The region’s leaders actively supported the industry.  There was a tradition of “boosterism” from local government, newspaper publishers and real estate developers.  Additionally, local universities supplied research,

The Aerospace Industry in Southern California

LAEDC:  Kyser Center for Economic Research  24 engineers and scientists.  A synergy grew up between R&D labs, test fields, institutes of higher learning and the industry.

The history of Southern California and its economy are inextricably tied to the aerospace industry.  While the industry has undergone many changes over the last 30 years, there are solid reasons why corporate relocations have not ended the aerospace presence in the region.  Opportunities still abound for aerospace firms in Southern California – the industry’s infrastructure, built over the course of 100 years would be hard to replicate elsewhere; there is an entrenched supplier base producing everything from fasteners to aircraft structural components and satellites.  The region’s talented workforce would also be difficult to recreate in other parts of the country.  And, the weather is as nice as it was back in 1908 when the California Aero Club of Los Angeles organized the nation’s first international air show in Rancho Dominguez.  Still, we cannot overlook the threats posed by the changing aerospace landscape, the challenge of finding workers with the right skills and the new defense budgetary landscape.

The information above is from a report done by LA Economic Development Corporation:

The Aerospace Industry Challenges in the South Bay