Redondo Beach lies on the western edge of the Peninsular Mountain Range which runs northwest and southeast along the coast of Southern California. It is approximately 17 miles from the City of Los Angeles, situated on the southern end of modem Santa Monica Bay. The incorporated city rests on portions of three historic ranchos: San Pedro, Los Palos Verdes, and Sausal Redondo. Several distinct sections make up the modern city of 6.35 square miles. The original city was established in 1887. The area of this original site covered 1,214.08 acres or approximately 2 square miles.

A second section to the northeast, the Redondo Villa Tracts, was first subdivided in 1906 and became part of the city in 1927. This annexation brought an additional 2,252.6 acres (approximately 4 square miles) of rural territory to the original townsite and created a city structure reminiscent of two rectangles set side-by-side, one set slightly above the other, which overlap at one corner. Today, the area included in the 1927 annexation is generally referred to as “North Redondo.”

Clifton-by-the-Sea, adjoining the original city on the south, began in 1906. A portion of it annexed to the city in 1913, and other tracts within the area have annexed at different times since then. The final section, Hollywood Riviera, lies south of Clifton-by-the-Sea and is divided between Redondo Beach and Torrance. These latter areas, although originally distinct, today blend into the resort and residential ambiance of the original city. The original community of about 1,214 acres was planned in 1887 on a natural amphitheater above the beach. Because of the limited acreage, the land was devoted to residential resort living and wharf related industry. Only a few yards out to sea, the amphitheater continues into a deep-water canyon.

The northern section of the community, composed of approximately 3,000 acres and first known as the Redondo Villa Tracts, is entirely different. Here the land is gently rolling and dry. The soil, however, is productive. Over the years, many small farms and dairy-type operations prospered here. During the late 1920s, oil was discovered in this section, as well as in nearby Torrance, forming the Redondo-Torrance oil field. North Redondo, which was originally subdivided as an agricultural area in 1906 and later experienced further subdivision during the Depression and post-war era, is today defined by its dense population and a broad range of architectural styles. Because of the salt lake, transportation linkages between Redondo, San Pedro and Los Angeles formed very early. When the Santa Fe railroad entered the basin, it made Redondo Beach a terminus for shipping. Two electric railways followed, which served the tourists who flocked to the pleasant beach in good weather. Evidence of these early railway lines remains today and can be seen in street curvature, the location of major intersections and the location of the City’s principal commercial centers.

One year after its failed attempt to annex to the city of Hermosa Beach, the Villa Tract Chamber of Commerce joined forces with several leading organizations in Redondo Beach and organized yet another annexation drive. Behind this new effort lay the threat of a million-dollar street paving program proposed by Los Angeles interests who owned 37 per cent of the area’s property. Chamber representatives argued that the proposed program was a blatant attempt to recoup lost profits from unproductive oil land, rather than a genuine attempt to modernize the community. This argument succeeded, and on September 20, 1927, voters approved the annexation of the Redondo Villa Tracts to the City of Redondo Beach by a slim margin of thirteen votes.

More than 90% of the eligible voters cast their ballots. At the time of its annexation, the north Redondo area served as home for more than two thousand residents. “It is by far the greatest thing that has ever happened to this city,” declared Henry Froude, president of the Redondo Beach Chamber of Commerce. Not all considered the annexation in such a positive light, however. In 1928, several Los Angeles commercial interests filed suit seeking a reversal of the annexation decision. These suits were followed by yet another in 1930. Finally in 1931, the last legal obstacle to the complete and definite annexation of the Villa Tract had been removed.

Although the sub-division forces which were apparent during the early 1920s subsided somewhat during the Depression era, residential tract development continued in north Redondo. Most notable was the Shore Acres sub-division created by the Home Extension Association. Located near the junction of Mathews Avenue and Phelan Lane, this housing project attempted to strike a balance between the original rural identity associated with the Redondo Villa Tract and the more recent identity of residential sub-division. Included as a part of this housing project plan was a co-operative market site where residents of Shore Acres sold produce raised on their property. Each Saturday residents sold flowers, fresh vegetables, fruits, eggs chickens and even canaries to the surrounding communities from the community’s market house. A parking area adjacent to the market house was also provided by the Home Extension Association in an effort to attract customers from the surrounding communities of Torrance, Manhattan Beach, Inglewood and Hermosa Beach.

In 1937, the Redondo Beach City Council formally recognized the increasing residential nature of north Redondo in its acceptance of a Planning Commission recommendation that the area known as Villa Tract No. 2 be rezoned from unlimited industrial to suburban uses.

Since its subdivision as rural farmland in 1905, north Redondo had experienced several shifts in its economic identity. The first shift occurred in the early 1920s when the land originally subdivided by Carlson for rural development suddenly became popular for its oil producing potential.

The annexation of the area in 1927 and its identification as the city’s future industrial site, resulted in yet another shift. Following annexation, almost the entire eastern section of the original Villa Tracts was zoned for industrial purposes. The construction of the Golden State Fireworks Manufacturing Company on property adjacent to Villa Tract No. 2 in 1928 appeared to confirm this industrial trend.

By the early 1930s, however, dreams of unlimited oil production had faded and speculators who had purchased land during the oil boom were seeking opportunities to subdivide their property into residential sites. This move marked the third shift in the area’s economy and set into motion a struggle between those seeking residential development and those who sought to perpetuate an industrial economy. 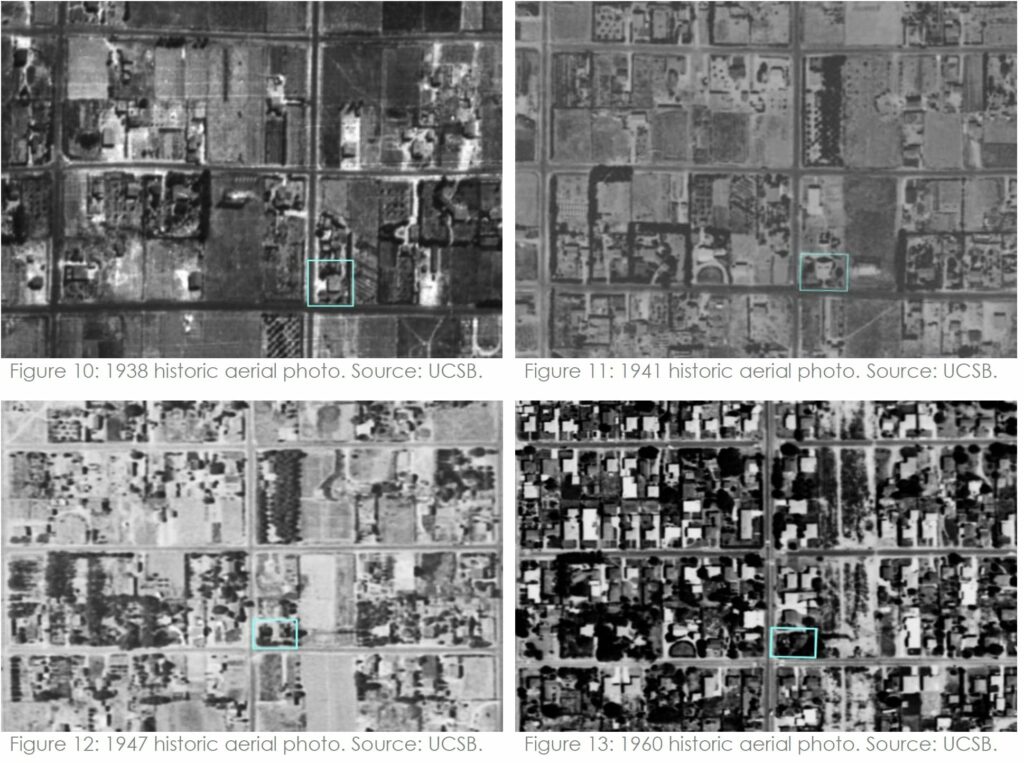