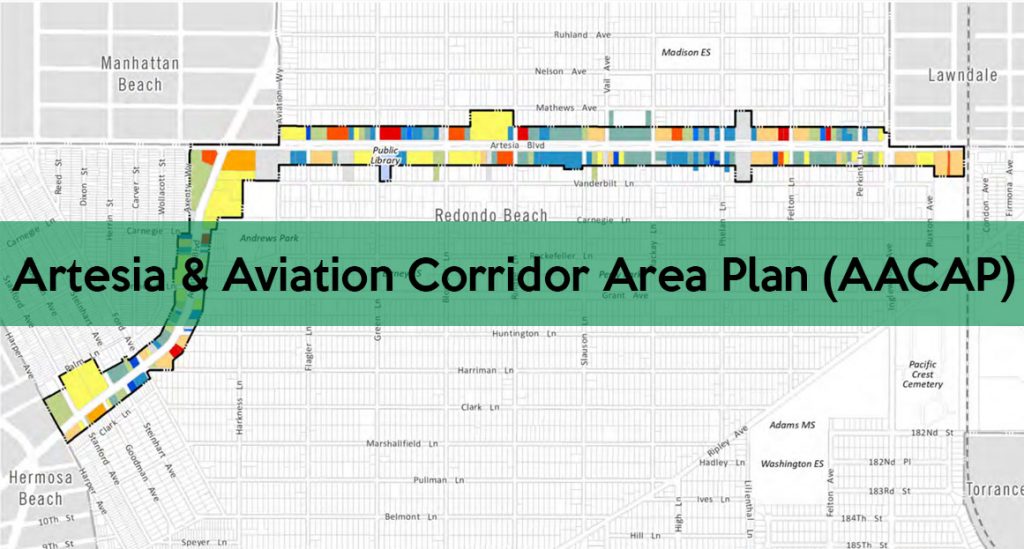 The most recent effort to move forward with improvements to the Aviation and Artesia Corridors was initiated in 2018 when the City Council authorized the preparation of the Artesia and Aviation Corridors Area Plan (AACAP) to provide more focused policy and placemaking guidance to one of the city’s most prominent and traveled east‐west Corridors.

The AACAP effort was rolled into the General Plan Advisory Committee’s (GPAC’s) ongoing efforts  and was informed by:

This document captures the recommendations of previous efforts as well as the analysis and discussions conducted in the development of this plan to define a number of strategies and implementable actions that will guide the revitalization of the Aviation and Artesia Corridors.

DESIRED IMPROVEMENTS FOR ARTESIA AND AVIATION CORRIDORS As a result of the various studies of Artesia and Aviation Boulevards in Redondo Beach over the years, several programs or actions have been recommended for implementation to enhance the vitality and user experience.

In general, the recommendations center around three primary topics:

To create sustainable, feasible, and effective Corridors, these three topics must be equally considered.

Aligning the three components often requires compromise and identification of ways to respond to today’s needs while assessing the trade-offs of future improvements.

The AACAP is organized by these three components and addresses a series of more detailed topics, which are listed here and are expanded upon in the remaining chapters of this plan.