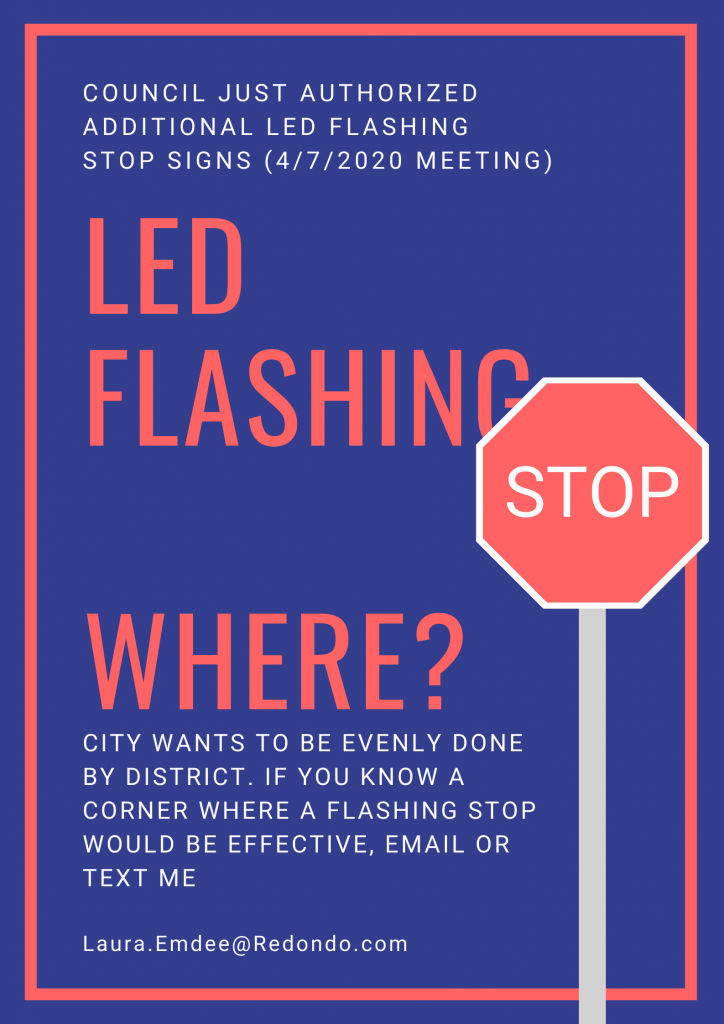 During the 2015-18 school years, Staff met with representatives from the Redondo Beach Unified School District and individual school Principals to discuss traffic issues around the schools. These discussions focused on developing options to reduce traffic congestion and enhance pedestrian, bicycle and vehicle safety. One of the numerous recommendations approved by the City Council was to replace existing STOP signs adjacent to the school property with new LED embedded flashing retroreflective signs. The LED embedded stop signs are intended to reinforce the command to stop around intersections adjacent to schools where many school-aged pedestrians cross.

Following the approval by the City Council on March 12, 2019, the staff has completed the installation of approximately 162 LED embedded stop signs throughout the City. Of the 162 signs, 145 signs were installed at intersections adjacent to schools as part of the aforementioned School Area Traffic Safety Program, 14 signs were installed at intersections per council member direction within Council Districts 1 and 3 (six and eight signs, respectively), three signs were knocked down and damaged due to traffic collisions and had to be replaced, and 20 signs are currently available for installation.

Overall, resident feedback for the LED embedded stop signs has been minimal, with residents’ concerns coming from only four intersections. Their concern focuses on issues with light emission, typically involving the LED light entering their residence, being reflected off parked vehicles or roadway surfaces. The LED lights have a concentrated visibility cone allowing the issues to be remedied by adjusting the stop signs and redirecting the LED lights away from areas of concern. There was only one location where removal of the LED signs and replacement to standard stop signs occurred to address resident concerns. The intersections of concern and the appropriate mitigation taken are as follows:

The staff has modified its procedures to include the use of notification mailers to inform residents of potential installation of LED stop signs at subject intersections and to solicit feedback prior to installation.

Council members have requested 19 additional signs for stop-controlled intersections within their district to receive LED stop sign enhancements. These have not yet been installed to be sure each District receives their top priority locations.

SO IF YOU WANT AN LED STOP SIGN on your corner – EMAIL ME – OR IT WILL GO TO ANOTHER DISTRICT.

Please only suggest stop signs near you. A few people who live on the corner were not happy with these stop signs. All but one person was satisfied once the angle and intensity was adjusted.

The additional requested locations received by staff and waiting to be installed are listed below: